Alaskan Arctic Grayling are a delight to catch as they readily hit dry flies and are a darn good fight for their size. The dorsal fin of grayling makes them look more like a sailfish minus the bill. They have beautiful colors and are a welcome treat on our trips to the braids of the Alagnak River or various fly-out fishing days we offer. Some anglers want to spend a day targeting nothing but grayling to give their arms a rest from the salmon fishing and still have a great time catching fish. The grayling average about 14” on the Alagnak with some getting into the 18” range. This is a big average for even Alaskan standards.

It is debated that the Alaska grayling is one of the best eating freshwater fish in the world. Their flesh is white and flaky when cooked over an open fire for a tasty shore lunch. At Angler’s Alibi, if the grayling fishing is strong, we will keep a few smaller grayling for a classic Alaskan shore lunch. We simply keep a few choice grayling in the 10″ range, as larger ones tend to not taste as good. We scale the fish and remove the innards. Then, with some butter, salt, pepper, and a little lemon, you can be eating one of Alaska’s best eating fish on the river! Like I said, we do this only if the population is very strong, and the guests are willing to eat the grayling in addition to the lunch we provide at Angler’s Alibi.  Read more about the camp dining experience.

When We Fish for Arctic Grayling

Arctic grayling are amazing fish.  They are basically a whitefish with a small mouth that is more suited for feeding off the bottom.  What is nice though is that they love to hit dry flies despite the grayling having a mouth like a sucker fish.  Grayling will hit surface patterns and nymphs with reckless abandon and are targeted from day 1 of the Alaska fishing season through the end.  Peak grayling fishing usually happens in June through mid July, but can be targeted from day 1 of the season through the end in early September.

​Grayling are the smallest of all the species of fish we target at Angler’s Alibi.  Probably more than any fish in the Alagnak River, it is possible to catch grayling on dry flies.  A 4 or 5 wt. is perfect for throwing floating lines for grayling.  They will even hit mouse patterns while you're trying to catch trout!

​Grayling love dark dry fly patterns.  Black gnats, blue quills and adams will all get the job done.  Skating a caddis in size 14 will also rise up some grayling for some aggressive strikes.  They also love bright attractor nymph patterns.  On occasion we will fish a nymph below a dry fly as an indicator for the aggressive strikes.  Prince nymphs, golden stones, and any nymph with a lot of flash and a g=bright bead with crush grayling in the sub surface realm.
contact anglers alibi for grayling related trips 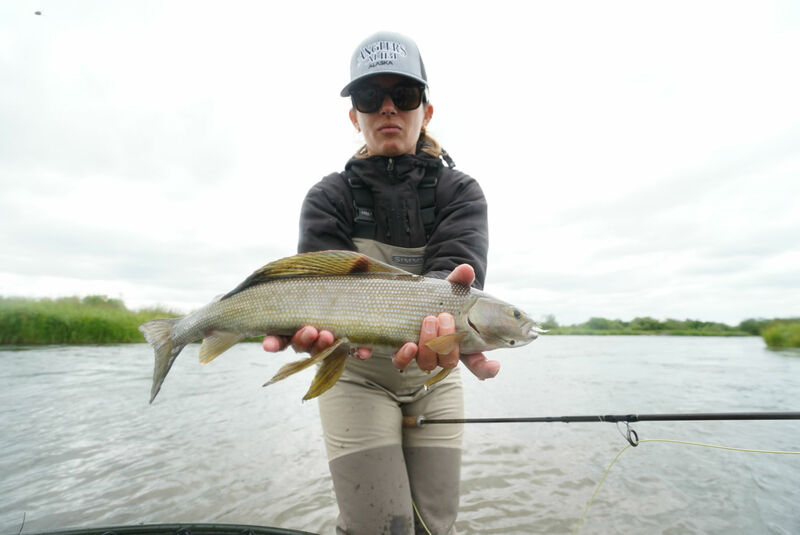 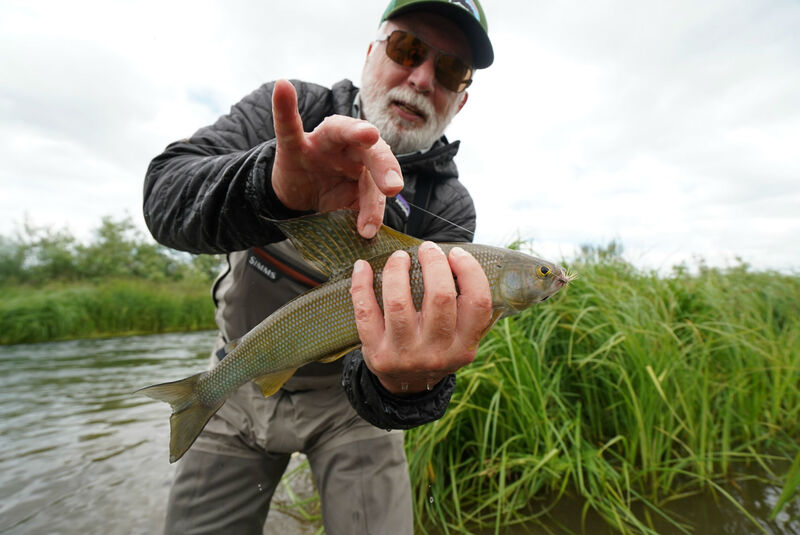 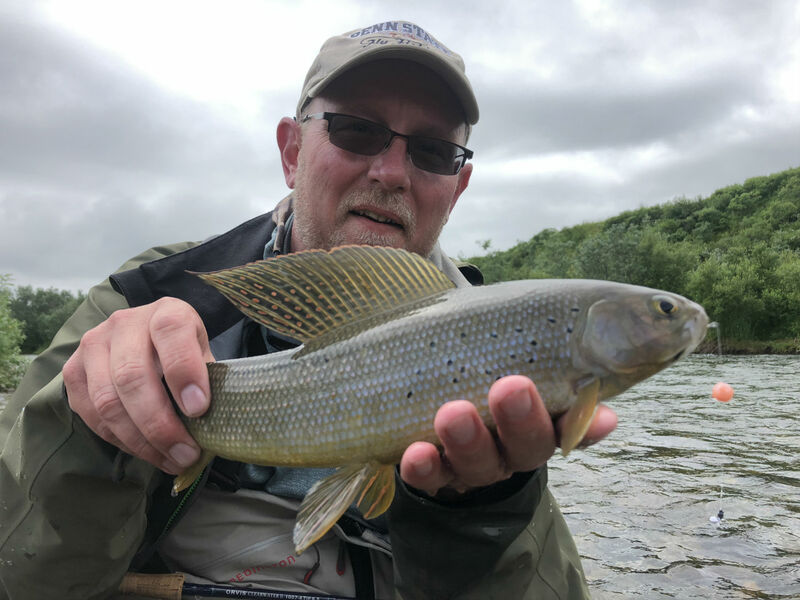 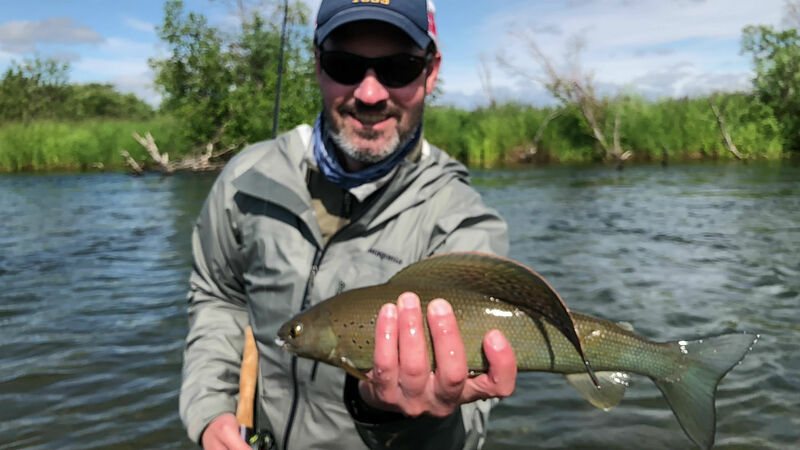 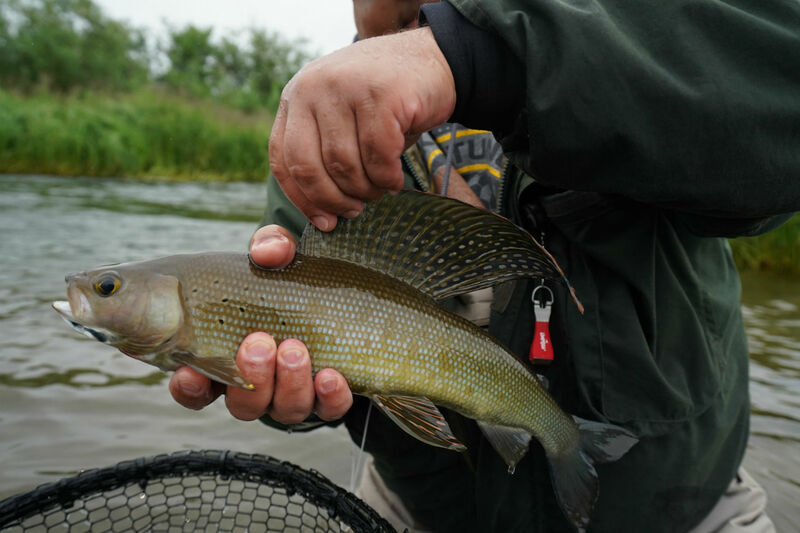 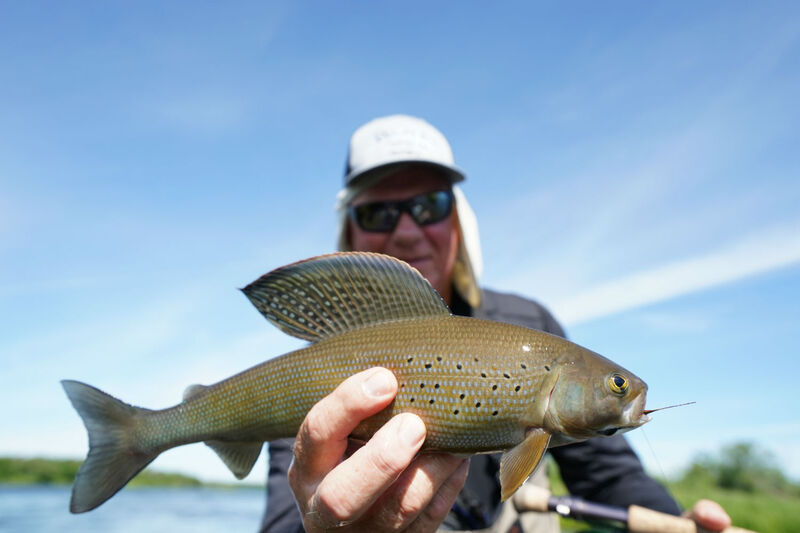