​We are very grateful to have a guide staff at Angler’s Alibi that does not experience a whole lot of turnover.  Our guides have over 90 years of total guiding experience on the river, with a large majority of this time earned on Alaskan rivers. Fortunately for us, one of our guides gained experience at Branch River Lodge back in the 80’s, and is still on the river with us now.  Angler's Alibi fishing guides usually start out within our program and work their way up to being a full-time guide. We have a 2-to-1 guest to guide ratio to ensure great attention to detail and guests' experience. Our guides rotate fishing with guests daily, allowing for new experiences for all of our customers.

Every guide has his or her own boat, and we keep them tidy and always ready for a quality day on the river. Our fleet includes 3 jet boats to utilize our upper braided sections of the Alagnak River for targeting trout, in addition to our 7 lower-river boats.
learn about our guides below and contact us to book time! 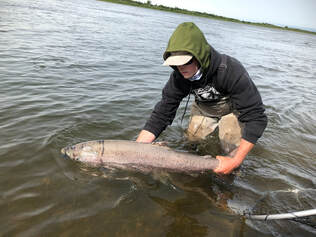 Logan came to work with Angler's Alibi several years ago and worked his way up the ladder within the business.  I have always said that these guides are special in that they not only know the river well but also know how the entire business runs on a day to day scenario.  Logan took on the challenge of guiding a few years back and has never looked back.  His laid back attitude and ability to find and target fish has proven well amongst the guests.  He is now working on his pilot license in the off season in Montana and may be flying a bush plane in the near future.
contact us to book your spot with our guides