Alaska Chum salmon are numerous on the Alagnak River and can be considered one of the most underrated fish species in Alaska. Unlike most Alaskan rivers, the chum salmon of the Alagnak enter the tidewater chrome bright and full of fight.

The Alagnak chum are often mistaken for silver salmon, as they have not begun to color up as they do in other rivers they enter. It is quite common for Alagnak River chum salmon to jump once hooked just like a silver salmon. There are two distinct runs of chum salmon on the Alagnak River: one begins the second week of July, and one begins the last week of July.  The runs overlap, making the chum a targeted species starting the second week of July, through the end of our season in mid-August. Click here for our complete fishing calendar.  ​

Chum hit flies on the strip, on the swing, and most importantly on top! They average 8 to 10 lbs and are, per pound, the hardest and longest fighting salmon in the Pacific - breaking more rods every year than any other species of salmon.

When We Fish for Chum Salmon

Chum salmon start entering the Alagnak River during the second week of July.  We have had seasons where the chum salmon fishing is lights out on the first week of July, but this early is not a normal time scenario.  The chum salmon have 2 distinct runs, and the the first run seems to end during the 4th week of July and the second run gets going on the same week, so never a delay with the overlap in run times.  The first run seems to be a little more sparse than the second run, but the fishing is still incredible with 25 to 40 fish days per rod not uncommon at all.  The chum salmon will run through the last week of August but really start slowing down during the third week of August.

We recommend using 8 or 9 wt. rods and lean towards the 9 wt. rod as the best choice for the chum salmon.  These beasts break more reels and rods than any other salmon species, even silver salmon.  The chum on the Alagnak are special in that they enter the river system chrome bright and full of that ocean saltwater fight.   This means that they usually take at least 2 huge runs once hooked and still give the angler one more before landing them while wading, a huge feat!
We recommend using a 15 pound tippet attached to an intermediate sink tip line like an AIrflo Sniper line or Cortland Ghost Tip line.  Chum salmon will also hit topwater poppers or "Wogs", so we make sure to have a floating line with a 9' leader tapered down to 15 pound Maxima Ultragreen.

The Alagnak River is famous in Alaska.  It is one of the top 5 salmon rivers in the world!  It’s two distinct runs of chum salmon are one of the most overlooked salmon runs.  The aggressive behavior from the ocean is still evident in the lower tidewater where Angler’s Alibi lodge is located.  We fish these magnificent salmon while wading the tidewater sand bars.  The chum salmon stage and run the edges of the bars while heading upstream.  It is important to try and catch the “marching” or traveling chums.  These fish are the freshest and most acrobatic.  Anything pink really does the trick, but the key is to get down in front of their faces.  An intermediate sink tip line is our choice for the chums.  It works well either swinging flies, drifting flies, or even stripping flies.

The floating line is used as well.  YES, the chums hit top water wogs just like silvers do.  We also fish them with floating lines and weighted lines on sunny days with a dead drift presentation.  The chum salmon are awesome game fish, and are appreciated by all our guests at Angler’s Alibi.

Despite their bad reputation for table fare from the natives, we continually serve our guests catch of fresh caught chum salmon almost every week we are open.   This meat is light salmon colored, and light salmon taste.  We use it for our beer battered fish tacos and appetizers.  It truly is one of our guests favorite meal items at Angler’s Alibi. (read about our new dining tent here)

The following selection of flies will catch not only chum salmon, but also silvers, pinks, and kings as well.

The pink spectrum is by far the #1 producer for chums on the Alagnak.  All these flies can be viewed and purchased at Alaska Fly Fishing Goods.
​Please note that Angler’s Alibi supplies all flies and tackle at no extra charge.

reserve your time to fish for chum salmon 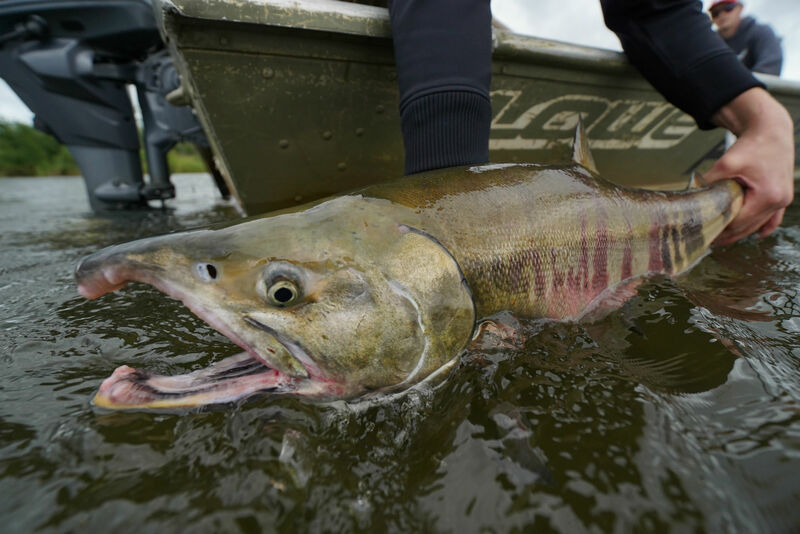 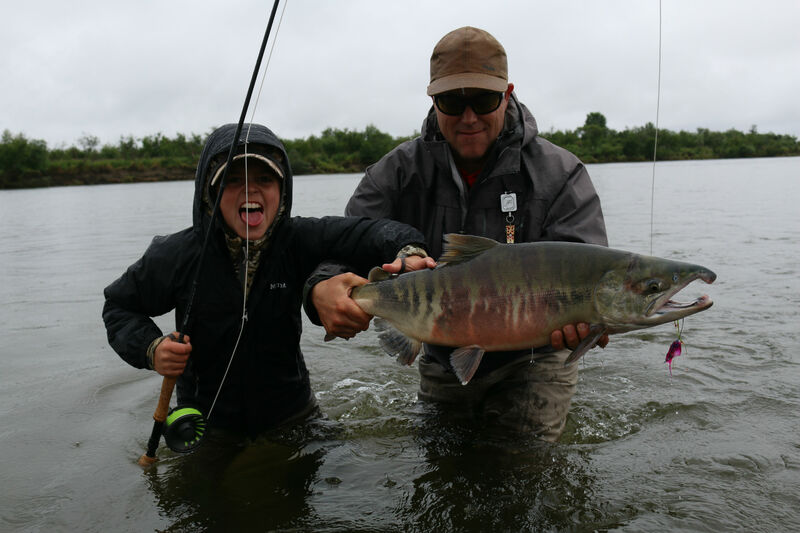 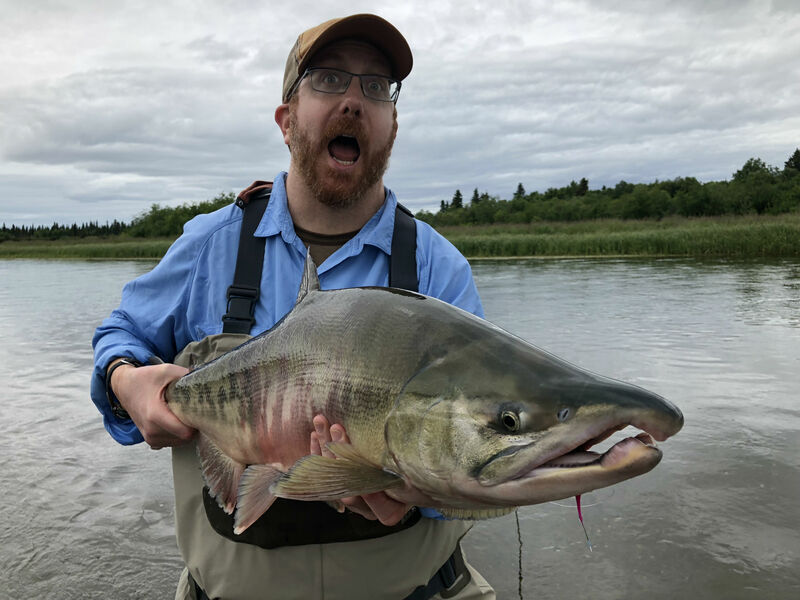 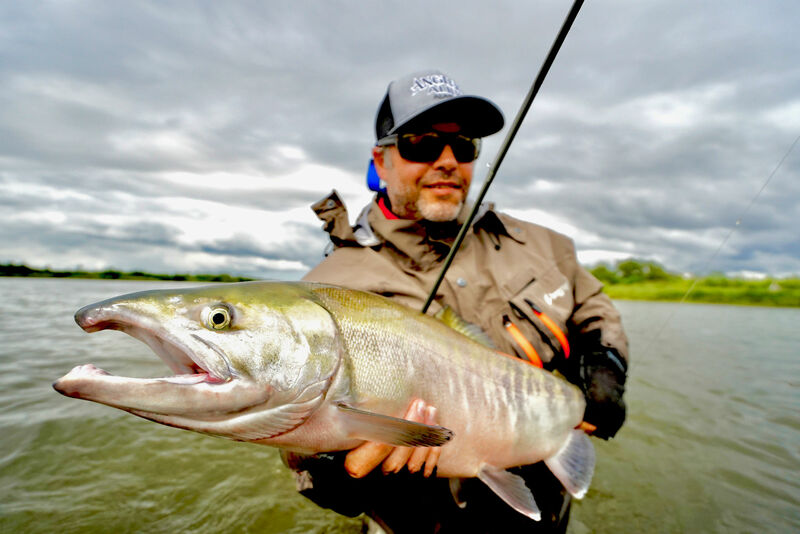 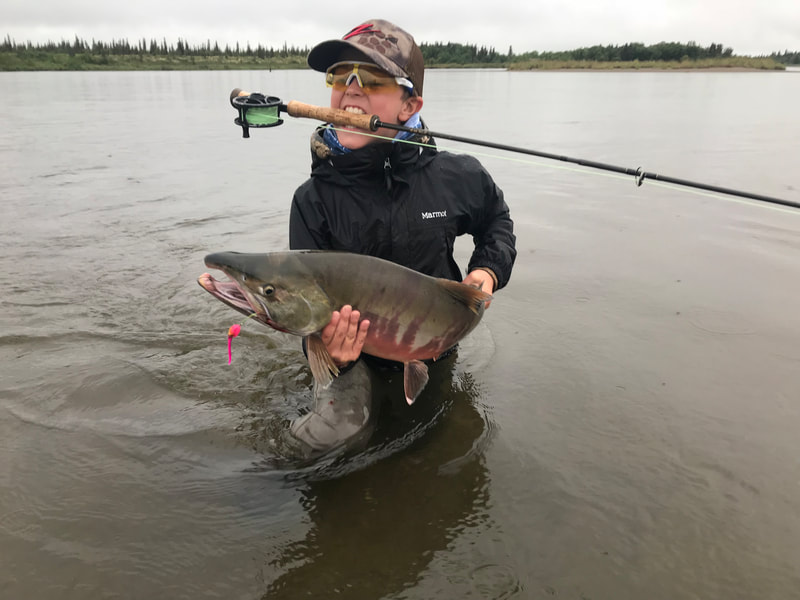 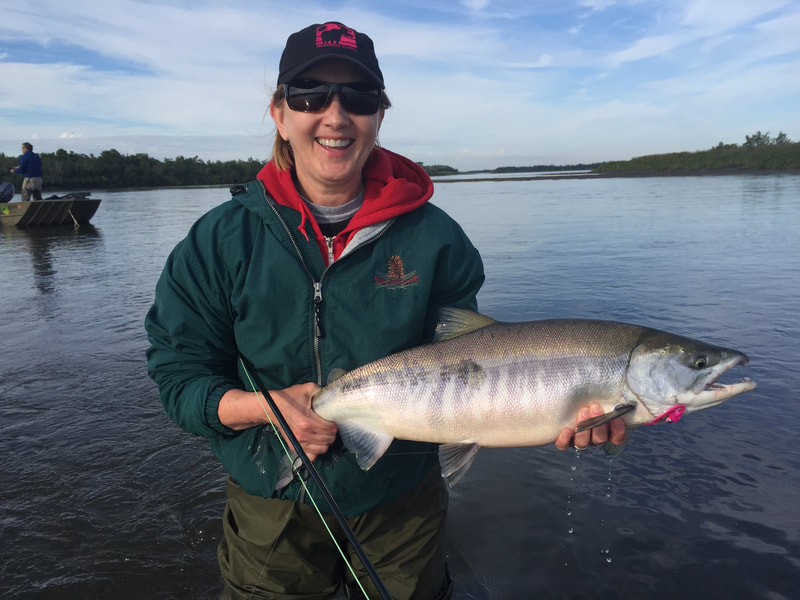